The Royal family has entered a new age of style with women like Kate Middleton and Meghan Markle inspiring new trends across the world. From the sapphire and diamond ring to pencil skirts and stilettos, some of these Royal styles are here to stay. With the recent Royal Weddings, a lot of attention has been given to the engagement rings and tiaras of choice. Here are some of our favourite designs, inspired by the rings of our modern-day royalty.

Kate Middleton’s stunning sapphire and diamond engagement ring was originally given to Princess Diana by William’s father Prince Charles. Diana is rumoured to have chosen the 12-carat blue sapphire ring herself from a selection presented to her. The featured sapphire is surrounded by 14 white diamonds, set in 18k yellow gold. This Midas ring is inspired by the most famous sapphire ring in the world, set upon white gold instead of yellow to make the cool tones of the blue sapphire appear even more stunning. 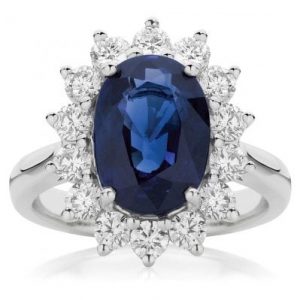 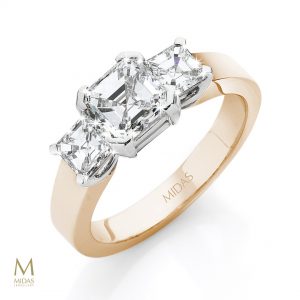 Meghan Markle’s beautiful trilogy ring was given to her by Prince Harry. The centre diamond was sourced from Botswana and the two side stones each come from Princess Diana’s collection. This was the couple’s way of celebrating the place they fell in love and making Harry’s late mother a part of their special moment. This Midas design is inspired by Markle’s lovely trilogy ring, with three asscher cut diamonds and a yellow gold band, Markle’s favourite. With a ring like this, it would be hard not to feel like a princess.

Sarah Ferguson’s striking ruby engagement ring was given to her by Prince Andrew, the Queen’s second eldest son. The couple was believed to have chosen the ruby to complement Ferguson’s red hair, with ten surrounding diamonds to give the ring a more unusual appearance. This style is very similar to Middleton’s sapphire ring as the surrounding diamonds give a floral appearance. This Midas ruby engagement ring features surrounding white diamonds with two pear shaped side stones and a yellow gold band, similar to Ferguson’s fiery design. 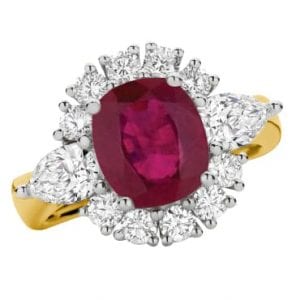 If you’re looking for an engagement or dress ring inspired by these lavish royal designs, the Midas collection has plenty to choose from. To give your own touch to one of these pieces, book an appointment with one of our master jewellers and start designing your dream ring today.

(We are currently offline. Feel free to try again in the morning.)